Thanks to Eli, Nurit, and Eden for taking me to Zippori. A mainly Jewish Zippori developed during the Hasmonaen and Herodian periods (1st century BCE). After the death of Herod the Great in 4 BCE, the citizens rebelled. The Roman army destroyed the city and sold many of its inhabitants into slavery. Having learned from the past, the remaining citizens did not join the revolt against Rome in 66 CE. Instead, they opened the city gates to the Roman legions and the city was spared. Following destruction of the second temple in 70 CE, Zippori became a center of Jewish learning. In approximately 200, Rabbi Yehuda Hanasi, one of the compilers of the Mishnah, moved to Zippori along with the Sanhedrin, the highest Jewish religious court. The city continued to flourish in the Byzantine period. Under Crusader rule during the 12th century, a small citadel and church were built on the city's hilltop. Later, an Arab village (Saffuriyeh) was built on the ruins of the ancient city. During the Arab uprising of 1936-39 and in 1948, the village housed Arab squads operating against Jewish settlements. Saffuriyeh was conquered and destroyed during Israel’s war of independence. In 1949 Moshav Zippori was founded, using the city’s original name. 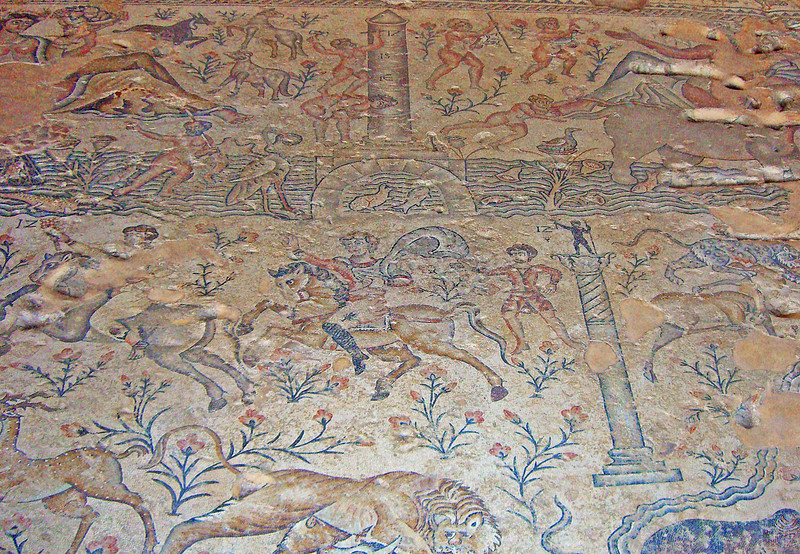 4-Mosaic floor (22 ft x 20 ft) recovered in a 5th century CE public building (ground floor area of 16,000 sq. ft.). Depicts celebrations for the rise of the Nile River water to its peak. Visible at top is a Nilometer, which measured the height of the water and determined the tax rate for that year. The man standing on the woman’s shoulders is engraving the number IZ (17)—the height of the water (which runs across the panel below the Nilometer). Below the water, horsemen head to Alexandria with the good news. At lower right is the 3rd century CE Pompeii Column.